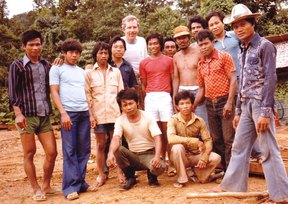 With drill crew at Soroako, Indonesia
As we drove up we saw a large python partly hidden under the bed of the workmen’s truck.  When we approached, the drill foreman came over and said that during the night a 30-foot long python had slithered into camp in search of a meal.  The hungry snake found and swallowed one of the workman’s chickens and it was then rendered somewhat helpless as the digestive process began.  The remaining chickens along with the goats were understandably skittish and their screeching woke the entire camp.  Not having the weapons needed to dispatch such a large snake, the men loaded their only truck with heavy steel drill rods, which made the four-ton truck a formidable foe for the slow moving python.  This happened at three o’clock in the morning and when we arrived at eight o’clock the giant python had finally succumbed. 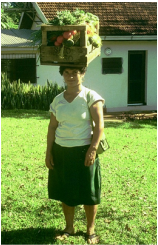 Maria in Pto, Iguazu, Argentina
There was a moderate-sized supermarket in town, but Sam also bought fresh fruit and vegetables from Maria, a Guarani woman who came to our house once a week with her produce in a wooden crate balanced on her head.  She’d come into our yard clapping her hands announcing her arrival.  The crate must have weighed 30 or 40 pounds, and the first time she came, she struggled to squat down so that Sam could see inside the crate to select the produce she wanted.  After that Sam got a stool and placed it outside the door and when Maria came clapping, Sam stood on the stool so Maria wouldn’t have to squat with the heavy box balanced on her head.
Crossing the Date Line can be purchased as an eBook for about $8 or $9 from book sellers like iBookstore, Amazon, Barnes & Noble, Kobo, Baker & Taylor, Copia, Gardners, eSentral, Scribd and Goodreads.