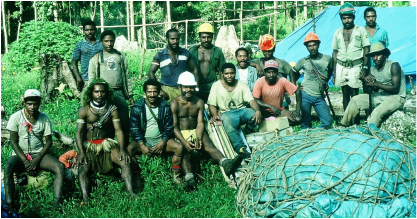 Papua New Guinea
The natives living in and around the project area in the Southern Highlands are short and squat, like dark-skinned hobbits.  They were quite primitive, wore bones in their noses and spoke only the native language of their tribe.  Except for the few project people, they had no contact with the outside world.  They were only a generation or two from practicing cannibalism and maybe the more primitive ones still did. ... At nine o’clock that night, the drums began beating and I heard a lot of yelling and shouting.  The protest had begun.

Sikkim
I walked alone for thirty minutes or so while the others stayed along the river bank far below.  I stopped to take a closer look at some of the exposed rock that outcropped along the steeper portion of the trail.  I was busy writing a few notes and taking pictures when a young boy suddenly appeared along the trail.  There are few Caucasian travelers in this part of Sikkim and with my fair skin and blond hair, I must have startled him.  He was as surprised to see me as I was to see him.  At first he looked frightened and nervous and appeared not sure whether to turn and run or stand still to see what I would do.  He carried a large machete, as did most of the men and boys in the area.  We stood and stared at each other for a few seconds, all the while his hand on the machete that he carried in a sheath attached to a belt tied around his waist.
Crossing the Date Line can be purchased as an eBook for about $8 or $9 from book sellers like iBookstore, Amazon, Barnes & Noble, Kobo, Baker & Taylor, Copia, Gardners, eSentral, Scribd and Goodreads.